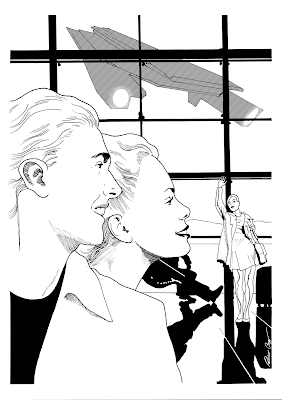 My closest friends know I'm a science-fiction fan. Awhile ago I was fortunate enough to do a single illustration for Planetary Stories, an online fanzine (e-zine?) of science-fiction tales edited by Shelby Vick a.k.a ShelVy. The illo has now been published online in the most recent issue of Planetary Stories, number 24, alongside a short story by Mark Fewell - you can read it here. And for the more visually oriented, here's my drawing. Enjoy!
Posted by Pedro Cruz at 7:00 PM No comments:

In comic book circles there's been a lot of talk recently on publisher DC comics' announcement of the release of a group of prequels to WATCHMEN, entitled BEFORE WATCHMEN. Tons of paragraphs retelling the whole story of Alan Moore's diatribes with DC comics concerning the rights, legalities and ethics of this whole affair have been extensively recorded on several different sources available on the internet.

Dr. Manhattan, for instances, couldn't help but notice how the pattern of repetitive clichés usually depicted in popular fiction is mimicked in real life, predicting this whole story will end as usual and perpetuate a cycle that began long ago:
- powerful corporation goes against one of their hired craftsmen demand to stop production unless his rights are met and hires other craftsmen in order to create more of the same old corporate product;
- in order to make more money, retailers will make space on their shelves to receive the same old corporate product by putting aside other independent products which, while less known, depict more creativity and personal vision;
- consumers will pass new fresh products by independent craftsmen and opt to buy the same old corporate products to fulfill their psychological addiction;
- powerful corporation will maximize their profits;
- the status quo will be reinforced;
- in the future, this pattern will be repeated once again, either with this very same basic elements or other analogs with slight differences.

To this, Rorschach has responded that what many fail to grasp is that Moore's complaint isn't about the money. That's the thing that the people who condemn him and applaud DC comics' decision to create these sequels against Moore's wishes fail to understand - like the hands-for-hire behind these prequels, they're trapped in the influence of corruption and cannot see beyond profit, greed and gratification at all costs. Why does one's will matter against so many? Because there is good and there is evil, and evil must be punished. Even in the face of these prequels, Moore shall not compromise in this.

On the other hand, Ozymandias has replied to Alan Moore's plea for wanting this not to happen by simply answering "They already did it thirty-five minutes ago."

Silk Spectre and Nite Owl could not be reached at the moment.

As for The Comedian, he's dead.
Posted by Pedro Cruz at 7:00 PM No comments:

The Secret World of Arrietty

I just found out about this new Studio Ghibli film. Looks fun!

I know, it's been over a month since 2012 started, but I've always found a bit silly how "the best of..." lists for a given year always show before the year is actually over. So here are my personal favorite comics of 2011:

Beauté, tome 1 - Désirs Exaucés by Hubert and Kerascöet. Sometimes less is more and in this case the deceptively simple drawings by Kerascöet and flat colors by Hubert create an aesthetic that is completely in-synch with the cautionary (fairy)tale of Morue. 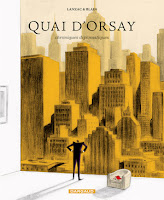 Quai D'Orsay Chroniques Diplomatiques - tome 2 by Lanzac and Blain. Best praise I can give: I found myself laughing out loud alone as I read this second volume chronicling the day-to-day behind the scenes of the french foreign affairs ministry staff. Christophe Blain proves once again his immense talent as a cartoonist.

Major by Moebius. Okay, technically this is a facsimile of a sketchbook Jean Giraud Moebius worked on over several years but I believe it was oficially released in 2011. I was amazed to see how much detail and accuracy the master was able to give the artwork at the small A6 size. Amazing!

Donald Duck - Lost in the Andes by Carl Barks. The first volume of Fantagraphics reprint of Carl Barks duck comics collected in an affordable format with beautiful restored flat colors proves that more than sixty years after they were originally drawn and published, these are still some of the best-ever all-ages comics.

John Byrne's Next Men: Scattered, part 1 and 2 by John Byrne. Total fanboy moment here: after this comic series was put on hiatus back in 1995 by its author, I (and everybody else) had to wait fifteen years before he finally resumed and finished the story with this couple of volumes first serialized as a monthly nine-issue comic series between December 2010 and August 2011. Unforgettable characters, classic artwork and a great time-travel science-fiction plot showed that maybe John Byrne should have never paused this in the first place... and apparently this was not the definitive ending as the first issue of a five-issue epilogue - Next Men: Aftermath - hits the comic book specialty stores next wednesday.